National Public Radio shared an interesting story about the redesigning of Helvetica. By far, Helvetica is used more often than any other face, so why redesign? Technical reasons, mostly to do with changing times. It’s a great story, but not for here.

Naturally, there were thousands of comments on their website, for and against. Next came the passive-aggressive “oh you said font when you meant typeface.” Then, like they do, the design snobs turned on each other like wild dogs in a feeding frenzy of who-knows-more.

Perhaps my favorite was the woman who said, “As a type designer, you should have said know-it-alls, all hyphenated with no apostrophe, not know it all’s.” She was right about the grammar, but her comment was as weird as if she had suggested, “As a plumber, I say you should get your tires rotated.”

I’ll bet my lunch that she’s not even a type designer. She works on page layout. Maybe a typesetter. You’re a type designer if you’ve created your own typeface from scratch. Maybe named it after yourself, like “Mr. Helvetica.” And if so, you’re way too cool to be scrapping it out with the rest of us in the comments of NPR’s website.

Font and typeface used to be very different. Like all things typographic, we snobs love to go back to terms used in the letterpress days, when everything was set by hand and made of metal and needed oil. But they’re not anymore, and those differences aren’t helpful. Back then, a font was a box of letters. You got them out and put them in a row to make a sentence. If you needed bigger or bolder letters, you pulled out another font from another box.

Nobody will jump you if you say typeface, because it is a general term for what you’re looking at. Do you admire the lettering on a magazine cover? Nice typeface! Proud of how your kid wrote on the sidewalk? Nice typeface!

So if there’s a a hair to split today, it’s here: a font is the tool you use to express your typeface. If Helvetica Regular 10pt exists as a different document on your computer than, say, Helvetica Regular 24pt, you have two fonts. (Back in the early Mac days, I had a unique font for every type size available.) Thanks to modern computer pixel fairy dust, we now use a single font to make any type size. But still, the font is the individual file on your computer.

So if you want to differentiate font from typeface, think of them this way: the lettering your kid drew on the sidewalk is a typeface made without a font. It was made with chalk, and your kid.

Zapf Dingbats is a computer font full of useful symbols—but it’s not a typeface.

My brilliant friend Frank is a linguist. I love this kind of stuff and pester him often with such questions. Because I actually listen to his answers, I know this is what he would say about font vs typeface:

“If two or more people use one word and they all understand what it means, it’s the right word. Words aren’t inherently right or wrong — they’re the tools we use for communicating. If they communicate successfully and reliably, they’re the right words.”

Can you imagine how disappointed I was? But I must admit, his wisdom is liberating.

So if you say “Helvetica is a great font and doesn’t need redesigning,” and all of your officemates know exactly what you mean, “font” was the right word.

I just can’t work with you. 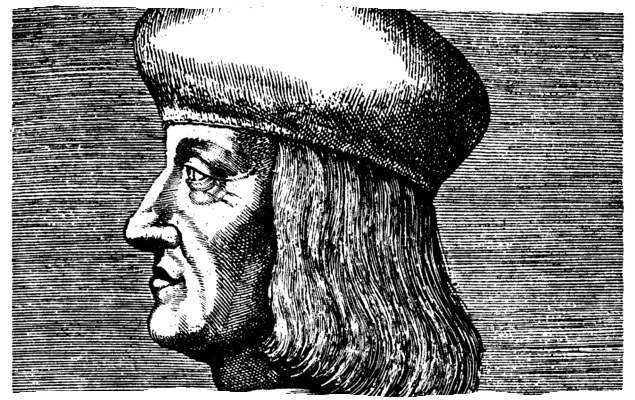 You know what an italic font is. Bold type is simple enough to understand. Bold italic? Easy-peasy. But what if a font isn’t any of those? If it’s just straight-up normal, like the text you’re reading right now?

We call that roman. (Normally I’d put a new term in italics, but that’d be a little confusing here, eh?) The type you’re reading right now is roman.

Bring on the machines

Before Johannes Gutenberg invented moveable type, fonts were all over the place. Sometimes a lowercase e had a bar through it, sometimes it looked a whole lot like the letter c. Everything was done by hand, individually, by artists. And you know how artists can be.

The printing press had limited fonts available, and from that necessity was born the invention of type designers. There were a handful of great ones during the Italian Renaissance, like Aldus, pictured above. They went a long way to standardize how type should look, so we mere mortals could all learn to read easier. Since they invented it, they got to name it. And they were all Romans.

They defined three general font categories: roman, italic, and blackletter. Blackletter is the proper name of what we often call Old World or Old English, the big swirly medieval-looking calligraphic style, like this:

Before you start yelling at me, we don’t capitalize roman when referring to letters. That’s so we don’t confuse roman letters with paper letters written by Romans.

Why didn’t they call the non-italic non-bold non-blackletter font regular, or normal, or standard? Who knows — except it helps to remember that during the Renaissance nothing was regular or normal or standard. Everything was new. This was the era of Michelangelo and da Vinci and Machiavelli and Galileo and Columbus, all upending the world order. Besides, Times New Roman probably sounded a lot cooler than Times New Normal.

Originally, blackletter, roman, and italic were never used together. It took another hundred years before it occurred to anyone to mix and match. Not long after that, those crazy nuts came up with bold italic, probably while drunk.

In web design, italics are summoned by the name emphasis, and bold is called strong. That’s what what you get when you let computer geeks name things. What are you supposed to say? “Make it strong, but without emphasis.” Get outta here with that.

Oblique font styles are like italics, but they’re not. Done right, italic is a uniquely designed font that complements its roman sibling. It’s quite different — very scripty — yet belongs in the same font family. Oblique fonts are just roman fonts skewed over. They’re the font equivalent of the Leaning Tower of Pisa: same, just crooked.

You can see how much more elegant a real italic is. Faux italic was invented by Web designers to help you get italic whether it existed in the original font family or not. If it was there, great. If not, they bent over the roman letters. So — computer geeks again. Sheesh.