Underlines for emphasis? How about never. 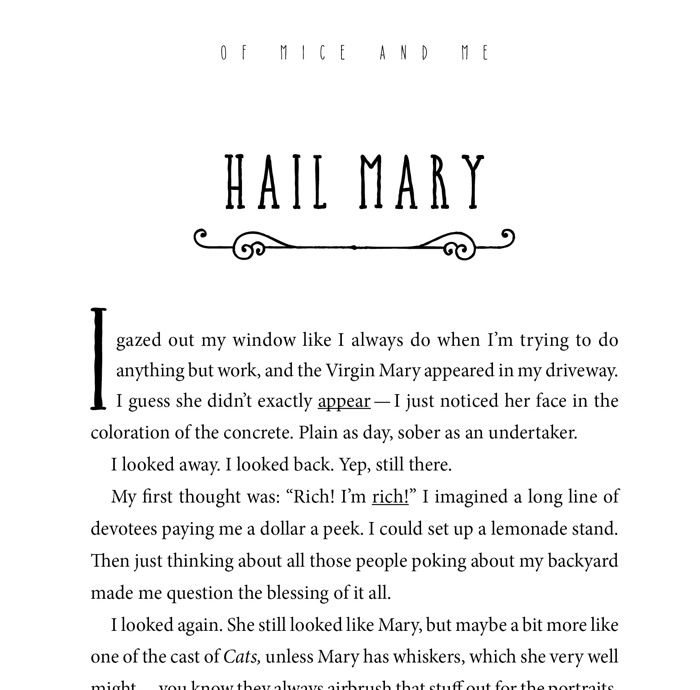 When you want to say something big — no, big — no, REALLY BIG, BIGGER THAN BIG, THE BIGGEST OF THE BIGS — should you choose italics, ALL CAPS, or underlined text?

First, consider none of those. Try letting the text speak for itself, rather than using formatting to speak for it. You’ll be surprised how often your story can remain clear and effortless without any text formatting at all. Indeed, reading this paragraph is a whole lot easier than the over-formatted one above. AM I RIGHT?

So okay, you’re sure you need emphasis after all. Which styling is best?

The case against underlines

Look at the sample text above. We’ve learned that underlined text is supposed to be more important, so that part works okay. But in this World of Internet Things we live in, many browsers use underlined text to suggest a hyperlink to another website. (They also often make links purple — don’t get me started on what a graceless idea that is.)

So what? So this: on websites, PDFs and eBooks, your readers will try to click on the link. Did you try to click on the purple word purple above? Nothing happened, in spite of it being underlined. And purple. Readers will think your document is broken, and they’ll pull out a voodoo doll of you and poke it for making them feel stupid.

Worse, the underlines cross right through the carefully designed descenders of the font: every g and j and p will have a fat black line across it. It looks crowded. To my eye, even underlined CAPITALS look jammed up. Underlining isn’t part of a font’s design, so it rarely looks like a nice addition.

So scratch out underlining for emphasis and leave it to the hyperlinks.

All caps: do you really need to SHOUT?

Maybe you do. Maybe your character is yelling his head off. But ALL CAPS has a big downside: it stands out on the page, calling attention to itself before the reader gets to the actual content. 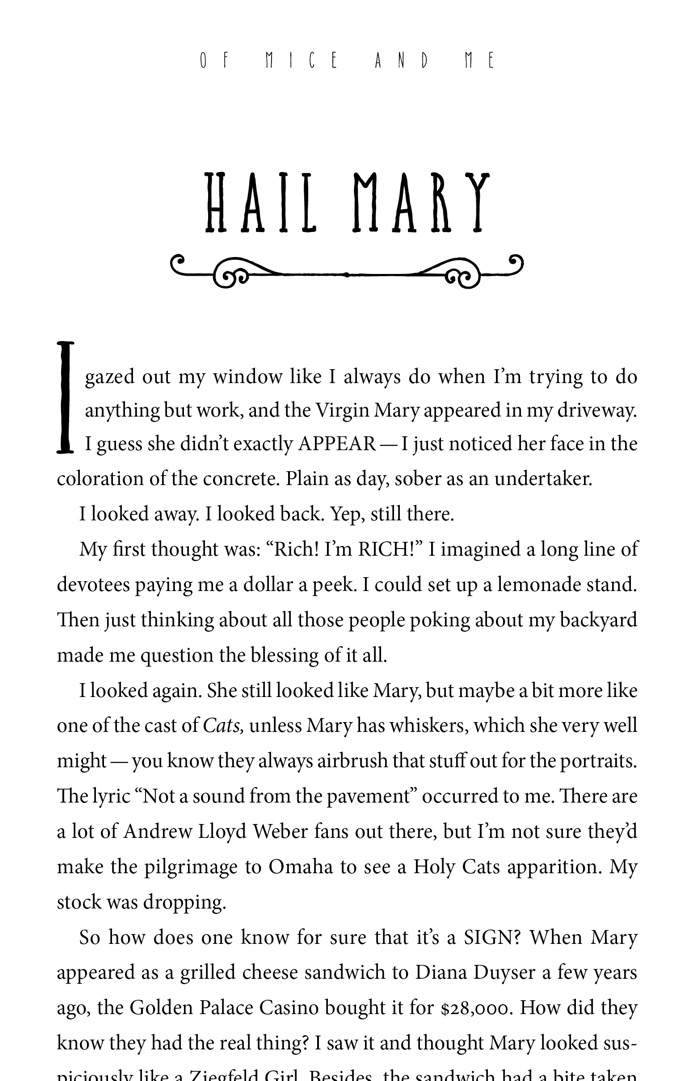 Capital letters stand out on the page before you even read it.

In the sample above, the capitalized words might as well be in hyperlink purple. As soon as you see the page they draw your eye to them, without the benefit of context. Your eye scans the page, picks out every capitalized word, your brain wonders why, then hopefully you go back to actually reading the text.

It’s subtle, but it interrupts the reading experience. We want reading to be so effortless that the audience doesn’t even notice the process, and just wallows in your brilliant story.

Bonus points for proportional oldstyle numerals: Let’s digress. Notice the numerals “$28,000” on the sample page above? You had to search a bit, didn’t you? That’s because the number was set in an “oldstyle” font. All OpenType fonts include oldstyle numerals, which are designed with ascenders and descenders just like other letters. That helps them blend into the text. Normal “lining” numerals are all the same height, and guess what? They look just like ALL CAPS. Google your writing program to find out how to call up the oldstyle option where appropriate. It’s usually about as easy as choosing italics or underlines.

And the winner is: italics for emphasis

Italic text is designed to blend perfectly with its surroundings, yet give the reader a little nudge. It doesn’t look dramatic, but that’s the whole idea. Let the reader add the drama in her head. Her imagination will do the shouting, and in her imagination is where you want to work. Underlines and all-caps risk yanking the reader back to the cold reality of your physical page. Italics work more like a whisper in imagination’s ear. 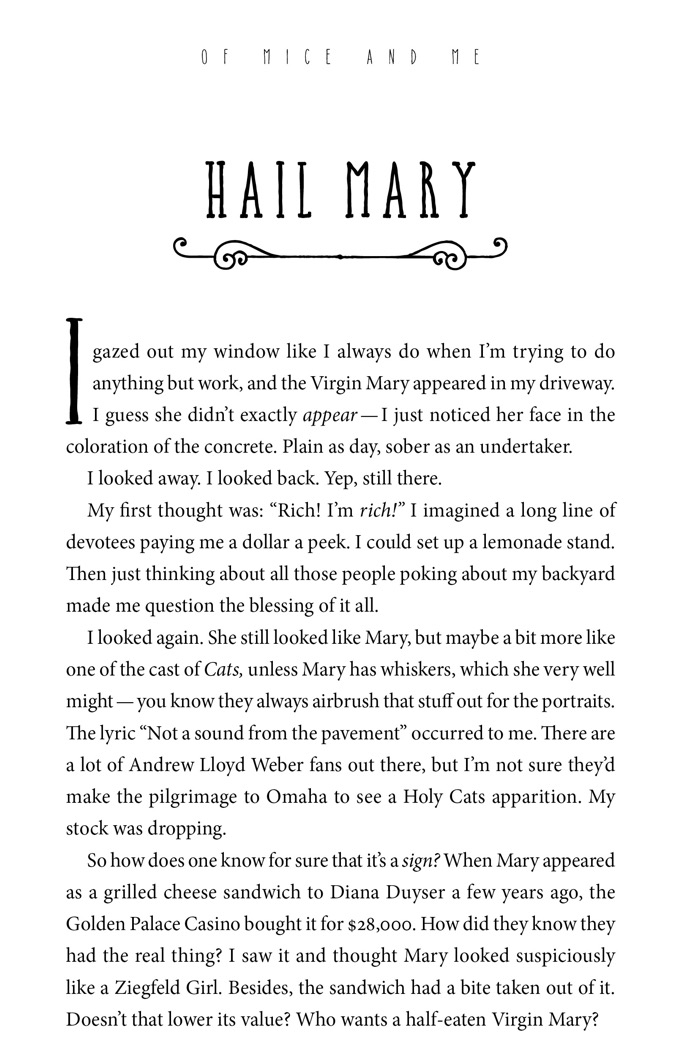 Italics blend perfectly with the text while still conveying emphasis.

Trust your reader to do the heavy lifting regarding how your story characters sound. Don’t force it with big font choices. Your words should do the talking, not your letters. And here’s a bonus primer on how to set italics properly.

Do you find the text samples above intriguing? They’re lifted from my latest book Of Mice and Me. And that’s in italics only because it’s a book title. That’s the law.

Should punctuation be included in italics?

Quotation marks are designed to fit the letters within them.

This problem came up in a book I was working on recently. The author italicized a lot of words, but didn’t include any of his punctuation in the italicization. Put another way, his words were italic, but his punctuation was Roman. It left a lot of visual crashes. As a tall person who’s constantly bumping his head, perhaps I’m extra-sensitive. But it hurts nonetheless. It’s more obvious with some letter pairs than others, but letters either crowd each other or leave gaps big enough to look like a letterspace. It’s ugly.

It’s like seating a lefty next to a righty at Thanksgiving dinner. There will be jostling. If you’re a lefty, you already know to fix that mess before the elbow wars begin: pair up correctly.

Good type designers go to great lengths to make their letters fit together gracefully, and that includes the punctuation. But all that design effort presumes the letters are in the same style. Opening quotation marks it italics ootch over to the right a bit because they presume the next letter will be leaning to the right as well, and they want to nestle up close. Closing quotation marks do the same, because the letter preceding them is leaning into their personal space, so they lean away with it. With quality fonts, the fit is a beautiful thing to see.

So the short answer is “Yes!” As opposed to “Yes!” (See what I did there? See that italic exclamation point topple into the unitalicized quotation mark?) Any punctuation attached to a word should be of the same style.

Seems easy enough. When I have a usage question, I head straight to the experts, like the Chicago Manual of Style. But wait a minute! Even these exalted sources disagree. Some even disagree with themselves: do it one way in this case, another way in that.

No. No no no no. Easy rule: when setting italics, select everything the word touches. Personally, I even select the space following the word before setting the style to italics. Like this.

It gets worse with parentheses, because they’re so tall. They start below the baseline and extend above the capitals, so the effect of all that leaning is exaggerated, like this:

Use that rule for all punctuation. Except maybe one exception. There’s always an exception.

I tested dashes in a lot of fonts to see whether the dash itself moved to the right when italicized. Turns out it doesn’t much, if at all. Dashes fall at the waist of a leaning letter, and the gaps tend to appear only at the head and foot. The waist is in the middle, like the fulcrum of a teeter-totter. So no worries, right?

The first dash has square ends, and the italic dash has angled ends. Rats.

Wrong. You have to look really close, but in the example above, the italicized dash (second one in the bottom example) has ends that are slightly angled to match the italicization. Subtle, but handsome. Since the spacing between letters doesn’t really change with italicization, it’s better that your pairs of dashes match each other. Kinda weird to have a square dash followed by an angled one.

I suppose you could argue that this isn’t really an exception, because a dash isn’t attached to the words next to it—it is an independent character. But if you get in a drunken brawl over that point, I’m not going to step in and back you up.

Actually, if anyone notices that one of my dashes is italic and the other isn’t, I’ll buy them a beer and thank them for caring.